Great post by John Lilly discussing why PC will be the truck:

I’ve been living with just my tablet and phone recently — it feels clearer & clearer that many people will just skip the computer phase altogether.

I think many people believe that means that we’ll have a world of consumers, since tablets and phones so far aren’t great creation tools. But I think that is changing, and quickly. Apps like Paper, from Fifty-three, and Diet Coda, from Panic, not to mention Instagram, are letting people create things on the fly that aren’t just throwaway, but are legitimate creations.

I picked up a phrase some time ago that I think applies: “The next big thing is always beneath contempt.” Implication being that it is, of course, until it isn’t. Until it’s too big to ignore. This has happened over and over again in our society. In the middle ages, people assumed that no serious discussion could happen in anything but Latin — the so-called “vulgar” languages had no merit. And writers assumed that nothing interesting or lasting would come from this new medium of television. And, I think, people assume right now that nothing important will be created from a 10” touch screen without a keyboard (let alone a tiny 3.5” screen).

This is a classic example of disruptive innovation as described in Clayton Christensen’s book Innovator’s Dilemma: a new technology comes from the low-end, becomes progressively better, and the old dominant technology can only try to escape to the high-end market. When a company focuses on enterprise, you know this is what is happening.

I’ve seen this in action several times, especially in the Open Source CMS market, where many of the old guard have been replaced by simpler and cheaper newcomers.

The lesson to draw is that when you hear people dismissing an entrant as just a toy, you should really start paying attention. Otherwise it will be too late. And this applies equally to products as to programming tools or technologies. A free software project may never die, but it can still become a lot less exciting as a result of such disruption.

I’ve written about why this is happening with tablets already earlier.

Update: Critical Path is a great podcast on disruption in the mobile market. Especially the one hour interview with Clayton Christensen is worth listening to. 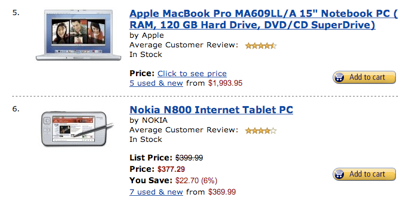 29 March 2007. 1 minute read.
As a Maemo application developer, I of course wonder how many N800 or 770 internet tablets are out there. Nokia hasn’t released any figures as far as I know, but looking at Amazon’s Computers & PC Hardware top sellers, it seems that at least N800 is selling well. Today it was on sixth place, behind some different MacBook and Toshiba...

13 November 2006. 1 minute read.
I will be flying to Foz do Iguacu tomorrow for the LatinoWare 2006 conference. My talk on Digital Business Ecosystem is scheduled at 2pm on thursday the 16th. As I’ve already given two earlier talks on DBE in Brazil, I will this time skip most of the politics and focus on how DBE can make everybody in the business of...