In the recent OpenMind conference we were discussing how open source projects simply don't die as long as there is an interested user community: Even if the original company or individual who built the application stops working on it, somebody will always rise and start maintaining it.

Last few weeks have been a great example of this. Nemein is the company which originally built the OpenPsa2 suite of project management and CRM tools for consulting companies. In last two years there have been some shifts in strategy, and so we ceased working on the product. 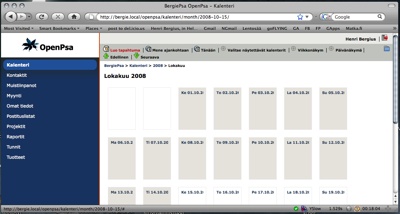 Luckily for our users, OpenPsa has been out under the GNU General Public License since 2004. This meant that while commercial development had stopped, they were able to step in and continue where we left off. It took a while, but during this fall Andreas Flack from Content Control started maintaining the software.

Now the effort is starting to bear fruit. Midgard world has recently settled into a new synchronized release model, and OpenPsa is swiftly catching up with the rest of the architecture. We expect that it may be released with the Ragnaroek 8.09.2 revision.

08 May 2004. 1 minute read.
The web-based OpenPSA suite was originally developed in 2001 under name Nemein.Net. The name was changed to OpenPSA as the application was moved to Open Source licensing.The OpenPSA is suitable for consultancies and service organizations ranging from 1 to 400 users. The software package is now available in English, Finnish and Italian, and it is easy to translate to other...

16 April 2004. 1 minute read.
There were some issues with getting the yamp Perl plugins to work with our UTF-8 encoded development database, but from now commits should work fine.