I started this blog on March 19th 2004. 332 entries and two years later it is time to reflect whether blogging makes sense.

I didn’t want to start a blog as a personal diary, and so stayed away from the phenomenon for quite a while. But then Paul Everitt told about his way of blogging: keeping blog as a centralized place to post information people ask about. With blogs you have a URL for each post you can point people to when they ask about something.

This wasn’t the first time I was blogging. I had what nowadays would be called a weblog on my site in 1997-98, and have blogged several of my motorcycle trips to Routa MC Journals. However, this was the first time I started to actively maintain a centralized weblog.

During this time the site has grown from about 50 daily visitors to over 2000. That figure is quite close to major consumer portals in Finland. The blog is featured on several Planet aggregators, and so is probably seen by even bigger number of people. This clearly shows there is demand for the blog.

On the more questionable side, the blog has also managed to annoy somebody enough to write code to censor it. I have to admit I’ve been posting long entries, entries with lots of pictures, and entries about very specific subjects that may not be relevant to everybody. But then again, this is my blog and I’m entitled to post whatever I want. :-)

Updated 2006-03-28: Paul Scrivens is asking whether designers can afford not to blog. 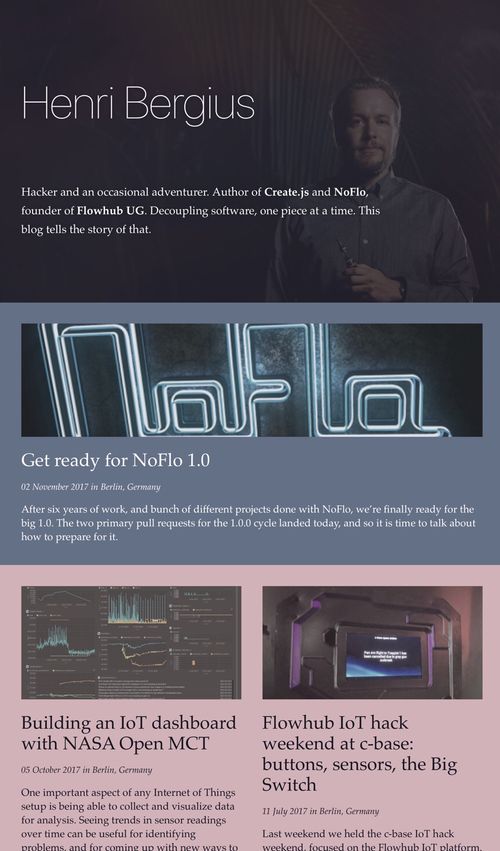 14 December 2017 in Berlin, Germany. 5 minute read.
I guess every five years is a good cadence for blog redesigns. This year’s edition started as a rewrite of the technical implementation, but I ended up also updating the visuals. Here I’ll go through the design goals, and how I met them.

11 November 2008. 1 minute read.
Ten years ago, 1998 Started my first "real job" as a site building in an ad agency Moved out of the commune We were running already the first production Midgard site Was in process of handing Harmaasudet over. By spring 1999 I would be out Five years ago, 2003 Did my first motorcycle trip to Russia Co-organized a very nice...