New York Times has an article about using cellphones as travel guides in Japan:

If you stand on a street corner in Tokyo today you can point a specialized cellphone at a hotel, a restaurant or a historical monument, and with the press of a button the phone will display information from the Internet describing the object you are looking at.

The new service is made possible by the efforts of three Japanese companies and GeoVector, a small American technology firm, and it represents a missing link between cyberspace and the physical world.

It is great to see some examples of positioned services such as this appearing, even if they are proprietary ones. We described a very similar scenario in our GUADEC talk this tuesday.

I still think that free software and free, wiki-like content is the right way to implement positioned services. Anybody can populate data to Geonames and Wikitravel, making the groundwork for much richer information resources than a proprietary database can be. 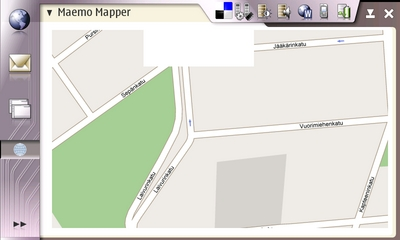 Maemo Mapper takes us closer to the Hitchhiker's Guide

16 May 2006. 2 minute read.
I’ve written before how Nokia 770 is the real Hitchhiker’s Guide to the Galaxy. The device already gives an ubiquitous access to the web, and now with the upcoming new OS release, to Jabber chat and VoIP calls.

05 July 2008. 1 minute read.
On Planet GNOME I can see lots of people have already arrived to Istanbul for next week's GUADEC conference. I'm also flying there on Tuesday. On Wednesday Jussi Kukkonen, Iain Holmes and I will be talking about location-aware applications with GeoClue and Gypsy at 3:30pm in X-Large. In preparation for the talk, be sure to check out my GeoClue slides...