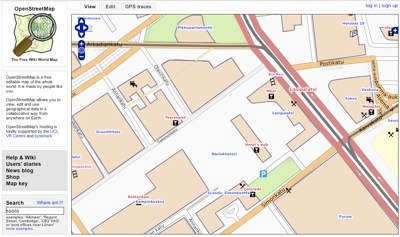 OpenStreetMap is a project for collaboratively creating open content digital maps of the world. It follows a Wikipedia-like model where interested contributors can go out with GPS receivers, and then turn those track logs into usable map content. And like Wikipedia, it is exploding in the amount of content and quality.

The last time I checked the status of Helsinki on OSM, it was already a bit promising but very initial. Now I went browsing again, and the map starts to look quite complete: 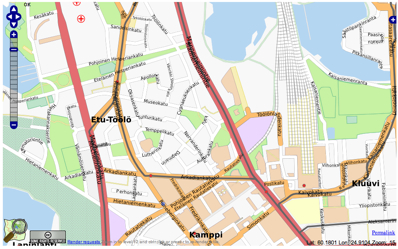 In some things the map is already more complete than competitors like Google Maps. On OSM, depending on the renderer used, the map also contains details like locations of parking lots, pharmacies, ATMs and post boxes. Many restaurants, pubs and cafés are also shown.

That actually shows a strength of the OpenStreetMap approach: people can add the detail they need. There have been projects where different renderer configurations have been used to focus the map on the needs of a special group: for example wheelchair users are very interested in information like how steep some hills are or whether a street is covered in cobblestones.

Showing information like that with a centralized big map provider like Google or Yahoo! would be difficult as it goes much further than just pushpins.

But still, there is much left to do:

In any case, I feel like the map is in a stage where it can be used for web purposes, and hopefully soon also for navigation software. It is a good time to learn the tools and start mapping! 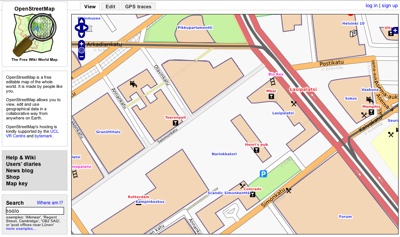 Google Maps doesn’t even get close. 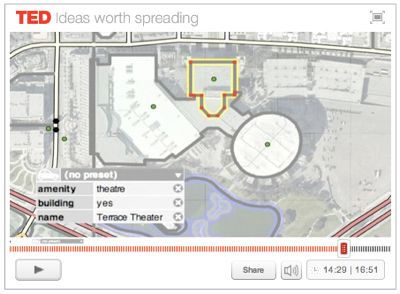 On Linked Data and OpenStreetMap

22 May 2009. 1 minute read.
Linked Data is the W3C effort to move data out of silos and into the interconnected web. As search engines are becoming more semantically savvy, the next big thing will be establishing connections between different pieces of data by linking. Sir Berners-Lee has an excellent TED talk introducing the concept. In the talk he also shows how easy it is... 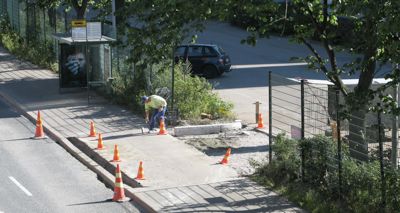 OpenStreetMap's user-generated data wins when there are changes

25 July 2008. 1 minute read.
I've blogged about OpenStreetMap, the user-generated open content map service, before. Having electronic map data freely available will enable completely new solutions for navigation and experiencing our surroundings. Being user-generated, OpenStreetMap can cope with changing environment in a much better way than the proprietary offerings. For instance: When walking to office today I noticed there was construction work ongoing to...