I've been following the Java Content Repository story since the OSCOM conferences of old. Last week, I took a new look at it as Bertrand Delacretaz from Day held a JCR presentation in the Interactive Knowledge Consortium meeting. And you know what? Midgard and JCR resemble each other quite a lot:

There are some important differences, though:

Even with these differences, Midgard and JCR remain surprisingly similar on the conceptual level. It would be an interesting experiment to finally create the Midgard-JCR bindings that Jukka Zitting started long time ago.

25 June 2008. 1 minute read.
Today has been an important day for the Midgard Project - development versions of both active Midgard branches were launched: Midgard 1.9.0alpha1 "White Nights" released Midgard 1.9 has been designed as a version easing the transition from Midgard 1.x to Midgard 2. To aid developers, the release includes both the classic Midgard APIs that are now deprecated, and the new... 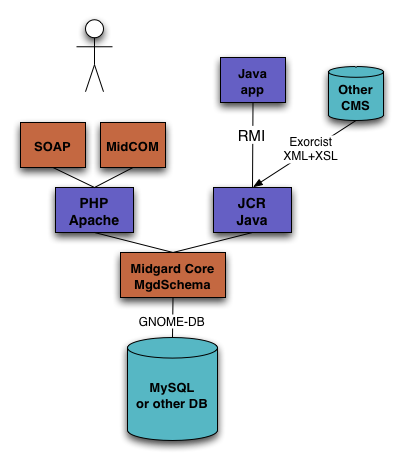 Jukka back from hiatus, JCR for Midgard

03 February 2005. 1 minute read.
We had a pretty interesting meeting with Jukka Zitting in Ilves last night. Jukka is the original author of the Midgard CMS, and has been on hiatus from the project since 2000. Now he has started his own company, Yukatan with plans of providing JCR-based integration services for Content Management Systems.