Google's Wikipedia competitor Knol launched a while back. It seeks to make writing informative entries more appealing to authors by offering a cut of advertisement revenue from the Knol pages. This can be a substantial thing as calculations say if Wikipedia had ads the revenue from them would be 42 million USD per year.

Having read Neal Stephenson's Snow Crash where the lead character Hiro, a fellow swordfighter and free hacker is making his living by collecting intel to upload onto the CIC library, the concept had some appeal. To test it, I created some pages:

Developing P2P business applications
Moving business applications to the web has solved many issues like easier deployment and backups, but at same time introduced a single point of failure in the infrastructure. A group of open source frameworks seeks to solve the issue by helping developers to migrate their applications into resilient and scalable peer-to-peer networks.

This should not detract from my open content activities, as the Knol pages are also Creative Commons-licensed.

18 December 2007. 1 minute read.
Quite a lot has been said about the Knol project announced recently by Google. While many see it as a direct Wikipedia competitor, there are quite significant differences: Instead of collaborating on articles every author makes their ownGoogle promises to display article authorship prominently and to share profits from ads in an articleArticles written by individual authors compete with articles... 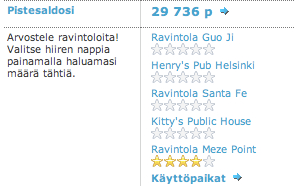 29 May 2007. 1 minute read.
I recently logged in to the Diners Club extranet to check the credit card balance after our trip to Provence, and noticed a new feature there. They had picked some restaurant bills from my credit card statement and asked for me to rate them in a very typical Web 2.0 fashion: