Quite a lot has been said about the Knol project announced recently by Google. While many see it as a direct Wikipedia competitor, there are quite significant differences:

In software terms this all makes Knol sound like a shareware project in comparison to Wikipedia’s open source model where many people collaborate to make good and neutral articles on a subject.

After a bit of thought I’m not sure if there is really need for something like Knol. Anybody can already start a blog or website specializing on a subject and monetize it with ads. And hosting in many situations is already free, so why place it in Google’s Knol?

Yet, I have to admit there is something Snow Crashy in Knol that I like:

Stephenson's vision of the Library of Congress or simply the 'Library' bears a striking resemblance to Wikipedia. In the story, millions of users are constantly uploading fragments of information to a searchable database. Stephenson's concept of the Library differs notably from Wikipedia however, in that users must pay to download most information. Indeed the novel refers to several people, including Hiro Protagonist, who pursue a career in uploading information in the hopes that it will one day be of value.

In defence of URLs and the Open Web

17 November 2009. 2 minute read.
An increasing number of web services and applications are emphasising search terms or pre-selected websites instead of allowing users to enter any address they choose. This is worrying, as while searches are more user-friendly, URLs are the heart of an open web where anybody can publish without obscure business dealings or oppressive app store policies. There are many examples of... 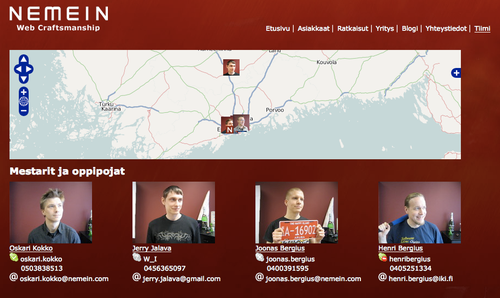 The Nemein team on a map

21 January 2008. 1 minute read.
We're in the process of publishing the new corporate website today. While our web needs are actually quite simple, the site includes some nice features. As we're involved in GeoCMS development, one such feature is the active team map: The OpenStreetMap gets automatically updated as we move around. This doesn't however mean that we've GPS collared our employees, but instead...