According to recent Helsingin Sanomat poll, 73% percent of Finns aged 55-64 years wanted to "control" the Internet, removing freedom of speech as necessary, in the light of the recent school shootings.

I've got very little to say to them, except:

"Those who would sacrifice freedom for security deserve neither" - Benjamin Franklin

Every knee-jerk reaction like this only fights the symptoms, not the causes of problems our society is facing. And at the same time, little by little, we erode away the values European culture has been built on.

Europe got ahead by applying new ways of thinking during the Age of Enlightenment. Now, facing global competition, is it really a good time to become like China? 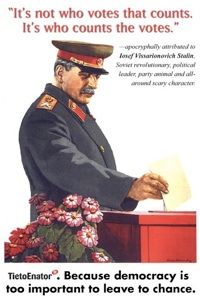 25 January 2008. 1 minute read.
According to the Finnish Ministry of Justice, the new electronic voting system that will be used in next municipal elections is a proprietary system. This means that Finland enters the era of Black Box Voting where the algorithms used for counting votes are secret and there is no paper trail. Electronic Frontier Finland (Effi) writes: "Companies may have business secrets,...