If you’ve been following my blog, you might have noticed that lately I’ve started doing quite a lot of Node.js development alongside PHP. Based on conversations I’ve had in various conferences, I’m by far not alone in this situation - using Node.js for real-time functionality, and PHP (or Django, or Rails) for the more traditional CRUD stuff.

Both environments have their strong points. Node.js is very fast and flexible, but PHP has a lot more mature tools and libraries available. So in a lot of projects it is hard to choose between the two. But now you might not have to.

Update: The post and the approach described here are quite dated by now. Instead of DNode, I’d recommend using message queues for this type of integration. Our MsgFlo framework provides a great way to build heterogeneous applications.

DNode is a remote method invocation protocol originally written for Node.js, as the name probably tells. But as the protocol itself is quite simple, just sending newline-terminated JSON packets over TCP connections, implementations have started popping up in other languages. You can talk DNode in Ruby, Perl, Python, Java, and now PHP.

I started working on the PHP DNode implementation in the Symfony CMF hackday in Cologne a week ago, and got it into a running stage on a train ride from there to Paris. The implementation isn’t yet complete, but works already quite well.

Like most Node.js functionality, DNode works asynchronously. So instead of waiting for return values you supply a callback function that will be called when the method completes.

Here is a simple DNode service for Node.js:

This creates a DNode service running in TCP port 7070 that provides one method: zing that multiplies the value given to it by 100 and sends the result to the callback provided.

Calling this with PHP is easy:

And run the client. As you can see from the PHP code above, once we get the result the client will end the connection automatically:

Because only simple TCP connections and JSON packets are used, this is quite fast. Here are time results for the client on my MacBook Air:

PHP as a server

PHP can also act as a DNode server. You instantiate the DNode class and pass it the object you want to expose via DNode. All public methods of the object will be made available to the DNode clients:

This DNode service will obviously be visible for both Node.js and PHP clients.

A DNode client can also expose methods to the server. In this example the server provides functionality for converting temperatures from Celsius to Fahrenheit, but actually gets the current Celsius temperature by asking it from a client.

Then just start the server:

And run the client:

The same will obviously work with a Node.js client:

dnode-php can be installed using the Composer tool. You can either add dnode/dnode to your package dependencies, or if you want to install dnode-php as standalone, go to the main directory of its repository and run:

You can then use the composer-generated autoloader to access the DNode classes:

Some DNode examples can be found from the examples folder. They are compatible with the similarly-named examples from Node.js DNode.

php-dnode is developed under the MIT license in GitHub. If you’re interested in it, please watch the repository and send issues or pull requests. 08 July 2011. 5 minute read.
As I’ve written before, I’m concerned about the state of the PHP ecosystem. There are lots of good applications written in the language, but there is very little code sharing between different projects, mainly because of framework incompatibilities, but also because of quite a strong NIH culture. 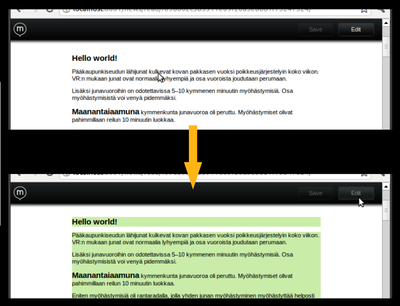 03 March 2011. 3 minute read.
You may have noticed that quite a lot is happening in the Midgard land. Nowadays Midgard2 itself is a generic content repository that can be used for both desktop and web applications. Midgard MVC is a generic web framework for PHP5 that can be used with Midgard2 or without it. And then there is Midgard Create, the new content management...