The honor, which is accompanied by one million euros, is bestowed by the Finnish Technology Award Foundation as an international acknowledgement of outstanding technological innovation that directly promotes people's quality of life, is based on humane values, and encourages sustainable economic development.

While many people in Finland have commented that this kind of vanity awards are a waste of public money, I believe that in this case it went to the right person. In addition to being the inventor of WWW, Berners-Lee also directs the World Wide Web Consortium (W3C).

I heartily recommend his book Weaving the Web on the background story of how the Web was formed.

In the meanwhile, Finnish industry has just donated additional 10 million euros to the technology award foundation, and advocate the government to raise the total sum to 25 million.

If Tim Berners-Lee had decided to patent his idea in 1989, the Internet would be a different place.

That is why some people think it is fitting - or about time - that he finally becomes wealthy, with the award Tuesday of the world's largest technology prize, the Millennium Technology Prize from the Finnish Technology Award Foundation. The E1 million, or $1.2 million, prize for outstanding technological achievements that raised the quality of life is supported by the Finnish government and private contributors.

29 October 2004. 1 minute read.
Major Finnish retailer Anttila was given the Finnish Quality Award 2004 yesterday by Speaker of Parliament Paavo Lipponen. Excellence Finland has an announcement on the award in Finnish. I've worked together with Virpi Mikkonen and the rest of the Anttila team in several related projects, and they are really committed to the quality process. The projects we've implemented have included... 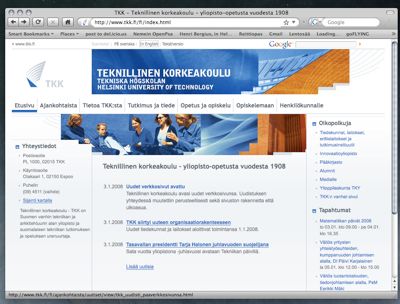