My posts on Decoupling Content Management, and especially the introduction to the "build a CMS, no forms allowed" approach we took with Midgard Create have generated a lot of interest.

When I first presented the approach in the recent Aloha Editor Developer Conference, many CMSs wanted to do something similar. And so we decided to strip the Midgard-specific parts out and make the tool a generic JavaScript library. As part of this work, the library was adopted by the IKS project and named VIE, or "Vienna IKS Editables". There first CMS implementations of VIE included WordPress, TYPO3 and KaraCos, with more on their way.

To get started with VIE, check these pages out:

In addition to Midgard Create, one of the first projects I'm implementing with VIE is Palsu, an interactive meeting tool powered by Node.js and Socket.io. It should explain the power of VIE outside of the traditional CMS space.

13 April 2012. 1 minute read.
It seems the idea of Decoupling Content Management is gaining momentum. On the user interface side, many projects have already adopted the VIE interaction framework and widgets from Create, and in the content repository space projects like PHPCR move forward and there are also interesting new ideas like Apache Oak. While much of this has been made possible by the... 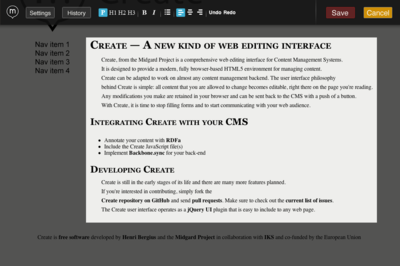 VIE and Create: an update

16 March 2012. 3 minute read.
It is again time to write an update on the state of IKS's two main components for the semantic editing part of Decoupled Content Management: VIE is the base semantic interaction library that handles the site's content model through RDFa annotations and Backbone.js synchronization Create is a new kind of web editing interface built on top of that. As the...