From the bubble-era start-up times in 2001, Nemein has based its invoicing on hours used, as is typical in the software consulting industry. The company provides services on a 100% pure, organic free software stack, and therefore there are no other additional costs beside maintenance on top of the normal work hours used for a client's benefit.

With some clients we invoice as we go, and with others everything is based on tight budgeted amounts of hours. However, as Cory Doctorow's 2001 essay on the utopia of Semantic Web reminds, humans are notoriusly bad at estimating the time something will take, and so often the resolution of a full or half hour is too strict for accurate estimation.

This, and the tediousness of time tracking has kept me looking for a better way. And such a way presented itself when having some discussions over coffee and cognac at a dinner party held in the Nokia Manor: how about stopping obsessing about strict amount of hours, and starting to use a bit more flexible model?

Following the Getting Things Done doctrine of allowing only "actionable" tasks, we would split every project into a group of tasks, each provided with a ballpark estimate labeled with terms common from the clothes industry:

We could've taken this to extremes and allowed XXL tasks, but again, to keep things actionable, it is better to split larger efforts into more manageable chunks.

Moving away from strict definitions of time used also would allow us to do something quite appealing: estimate the impact of a given task, the benefit a client will receive from it, and use that as the basis of invoicing.

Of course, this all will not free us completely from the evils of hour reporting. Finnish employment law requires us to keep track of working hours to make sure overtime is compensated, and many of the freelancers working with us bill us by the hour. But now this hour reporting will be greatly simplified as you can just "clock in and out" at the start and end of the working day instead of trying to keep track of various half hour bits and pieces.

And instead of tracking how much time we've spent at the office, we can start measuring the tasks accomplished for our clients. And that should be the more important thing for a consultancy.

Nemein has a new home

12 January 2015 in Berlin, Germany. 1 minute read.
When I flew to Tenerife to sail across the Atlantic in late November, there was excitement in the air. Nemein — the software company I started in 2001 with Henri Hovi and Johannes Hentunen, and left later to build an AI-driven web publishing tool — was about to be sold. 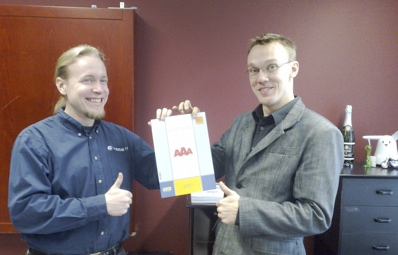 26 October 2007. 1 minute read.
We found out a while back that our company, Nemein now has AAA (the highest) credit rating. Quite an important milestone for a free software company started during the dot com bust!