In a report released yesterday, the Pew Internet & American Life Project puts ownership of tablet computing devices at 25 percent among American adults. This breaks down almost evenly into “iPads” and “everything else,” with 52 percent of tablet owners using an Apple device and 48 percent with some flavor of Android-powered tablet. The growth in tablet ownership over last year is tremendous, with the study pointing out that 68 percent of tablet-owning adults have purchased their device just within the twelve months.

Now, most of this is because the tablet form factor is very convenient for reading, playing games, and watching media. Actually, so convenient that many take their tablets to the bed. The fact that you can get a good tablet now for around 200€ (and much cheaper) probably helps as well.

How do I use a tablet?

I have a long history with tablets, stretching from the mid-2000s Nokia Linux tablets to the iPads and the excellent, affordable Nexus 7. This has given me a lot of time to think where they fit in my life. I’ve even produced quite a lot of media on the smartphones of old.

Much of my work is developing software, which, until ideas like like flow-based programming take off, is still mainly textual. There are developers who have adapted their workflows to a tablet, even doing professional software development for a whole year on an iPad.

I may follow this example when the lease of my current laptop expires, but for now the tablet is purely a leisure and testing machine.

What will be the VisiCalc moment?

With PCs the factor that made them from simple video games and hobbyist programming to a viable business tool was a single application: VisiCalc

VisiCalc is one of the most important programs ever created for microcomputers. It was not only the first spreadsheet program but is also generally regarded as the first “killer app.” It was the top selling program for four years, selling more than 200,000 copies in its first two years alone. Its popularity helped to drive early personal computer sales; many people bought a personal computer just to use VisiCalc.

This is an important point to consider for tablets. VisiCalc made a PC something you’d want to have because it took a lot of the pain away from accounting and business estimation.

This is not a laptop

Some consider tablets just bad laptops with a detachable keyboard, a point which Microsoft seems to agree with to some extent. However, there are several aspects that make tablets very different from the computers we’ve had before:

These mean that we also need a different class of productivity software. I’d even go as far as saying that tablets, with their big screens, would need a completely different UI design mindset than the small smartphones.

Until now, text has been the dominant way of handling business communications. Touchscreens are bad for writing, and so the professions that have most benefitied from them have been from outside the traditional business domain: musicians, photographers, and many others can already do some things better on a tablet than they could on a traditional computer.

If you’re dealing with text, the PC is probably still the tool for you. For now.

With tablets and smartphones becoming ubiquitous, it might not be far-fetched to imagine the business culture to change as well. Consider:

Every major shift in computing has brought its new big companies. PCs gave us Microsoft, web Google and Facebook. In the tablet space the focus has so far been on hardware and platforms, but I’m quite certain there will be winners in the productivity software space as well, companies that we may not have even heard of yet. Maybe your company is going to be one of them?

One interesting area is user interfaces you don’t actually have to use, using sensors and machine learning to make software contextual, to react to the environment and needs of the user before they know them. Google Now is an interesting, but so far short step into this direction.

Previously on my blog: “It is just a toy”. 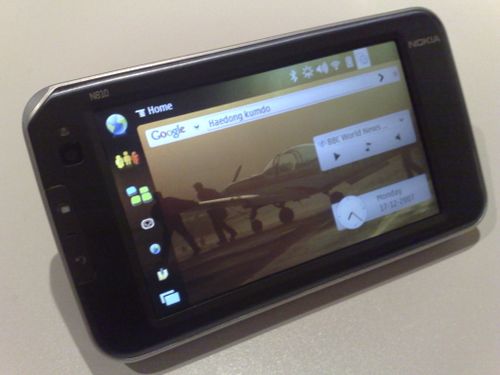 07 January 2008. 1 minute read.
And I’m not talking about vodka this time, but instead about the latest internet tablet from Nokia, the N810. I’ve now had the device for some weeks, and it has really started to replace the laptop in many situations.