Qaiku's twitter-like API has been one of the first major contributions I've made to the project, and it is great to see some first applications start to use it. Here are some examples: 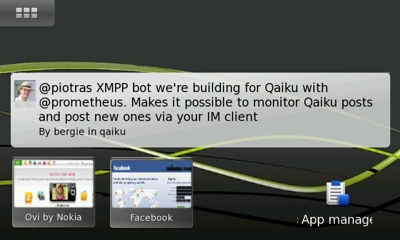 Gwibber is a Linux desktop microblogging client. Qaiku support is now available in the development version: 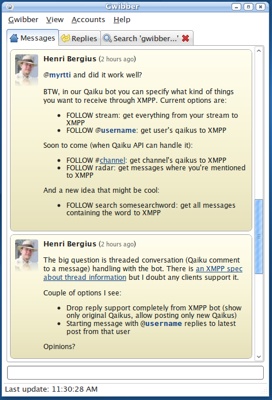 There is also an XMPP bot that we're going to launch soon for wider use. This enables you to monitor your mentions or some channels and post via any Jabber client:

If you're doing something cool with the API, please let me know! The #Qaiku-api channel is good for usage questions and ideas.

Every now and then people ask me why we're doing Qaiku instead of "just using Twitter". Here are some points why Qaiku just works better:

08 January 2009. 3 minute read.
As it was for the Zend folks, 2008 was quite a busy year also in the Midgard-land. I think the last time there was so much activity and energy in the project must've been sometime in the early days. Here are some highlights from it: Midgard 2: finally a reality The big news of 2008 was that Midgard 2, the...

08 April 2009. 1 minute read.
Midgard2, the content repository for multiple programming languages that we've all waited for so long is now in beta stage, and some services like Qaiku and St1 ReFuel already run on top of it. To get you started, here are some of the best Midgard2 blog posts out there: Midgard 2: More than just PHP, more than just CMS -...