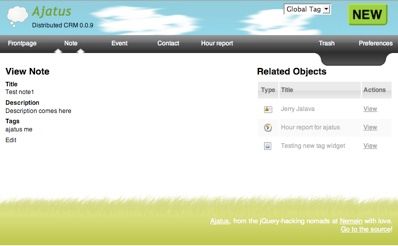 While there is no public release yet, I though to give a heads-up on a project we’re working on with Jerry: Ajatus is a distributed, or peer-to-peer CRM system built on top of CouchDb. 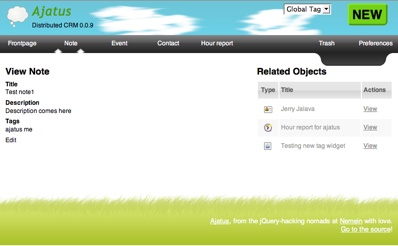 What makes Ajatus so special is the approach we’re taking with it. Having with OpenPsa found the traditional, hierarchical CRM approach unworkable we wanted to solve the problem in a different way:

To help us stay on the right path we even wrote an Ajatus Manifesto to guide ourselves.

Currently the software already runs and does pretty much all the basic things needed. Once we get it into state where we can dogfood it (in interoperation with the company OpenPsa) we will make the first release. Until then, stay tuned, check the Git repository and join the talk! 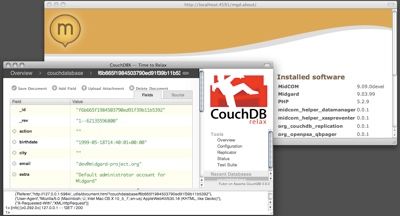 CouchDb and Midgard talking with each other

06 July 2009. 1 minute read.
CouchDb is a really cool document-oriented map/reduce database that is nowadays an Apache project. Previously we created the distributed CRM application Ajatus on top of the system and ported CouchDb to Maemo. Here in Gran Canaria Desktop Summit CouchDb has been somewhat a hot topic, as the Ubuntu project is planning to use it as the content repository for desktop... 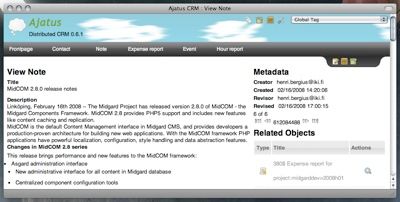 20 February 2008. 1 minute read.
MIT Technology Review's 10 Emerging Technologies of 2008 report includes offline web applications as a rising trend. When developing Ajatus, our new P2P personal CRM the offline issue was often in our minds. We even wrote in the manifesto: Ideas may come to you when you're sitting in a bus, boarding an airplane or visiting a hospital. For a CRM...