The growth of mobile web users is staggering. While some of us have been browsing the web on mobile devices for nearly ten years, most of the world population is only now getting there.

The number of mobile web users is already at 1.5 billion, which happens to be quite close to the total number of Internet users back in 2009.

And it is growing rapidly. In 2015 there will be an estimated 2 billion smartphone users which is quite close to the total number of Internet users currently.

In the developed world, this is likely to be a mixture of tablets, smartphones, and traditional desktop computers, with most users having at least two different web-capable devices. In the developing world, the smartphone is the computer.

Considering these statistics, it is insanity to design websites and services PC-first, with mobile only as an afterthought.

Just some years ago, the mobile web was a slum. Instead of getting full-featured websites, many sent us out to poorly-built and featureless m. sites. Now more and more sites go with responsive web design that makes the site itself adapt to different screen sizes and resolutions.

But even with responsive design, it is easy to go overboard. Tools like WordPress Jetpack and jQuery Mobile oversimplify the site itself by trying to make it look and feel like a native app. In the mobile-first world this is not the right way to go.

Mobile users should get the same content. It’s frustrating and confusing for them if you only give them a little bit of what you offer on your “real” website. If you try to guess which subset of your content the mobile user needs, you’re going to guess wrong. Deliver the same content as your desktop user sees. (If you think some of your content doesn’t deserve to be on mobile, guess what — it doesn’t deserve to be on the desktop either. Get rid of it.)

There is no pixel-perfect

In this new world users will access your content or software using a wildly varying set of devices. And each of them has the reasonable expectation of being able to access the full experience and the full set of features you’re providing.

This changes web design substantially. Even in the old world of different PC browsers, pixel perfect web design was rarely that. With responsive design, it is even less so.

CSS Media Queries make responding to different form factors quite easy. And besides that, they also make it easy to optimize for the different screen densities we now have. This way your images will look sharp on anything the users have, from the “retina-class devices” to the lowest-specced Chinese smartphone, while requiring the user to only download the assets that their device can utilize.

The devices people use to access the services you provide will vary greatly not only in their display capabilities, but also in the ways you can do input. Some will have mice and physical keyboards, but an increasing amount will instead have a touchscreen. For these users, it is a big service to use the correct HTML5 input types so that the on-screen keyboards and widgets can adapt to the content being entered.

The web is not native

The web is its own platform, and as such it is foolish to try and mimic traditional desktop applications. It will never feel quite right whatever you do.

It is a lot better to accept this and fully embrace the unique advantages of the web platform:

Every major software company on the planet has their own web browser, and the competition between these is fierce. This will ensure that over time, the web will keep on getting better and faster. Compare this to traditional software platforms that can easily stagnate or get abandoned. Thanks to the standard protocols it also allows you to use any technology of your choosing for the server side of your software.

Paul Graham put it well in his The other road ahead from 2001:

And you don’t have to know if you bet on Web-based applications. No one can break that without breaking browsing. The Web may not be the only way to deliver software, but it’s one that works now and will continue to work for a long time. Web-based applications are cheap to develop, and easy for even the smallest startup to deliver.

Things are getting better

As somebody who has been developing for the web for nearly twenty years the rate the web developer experience keeps improving is sometimes dizzying.

We get used to some limitations in the stack, and then suddenly something comes along and removes that shortcoming. We’re still exploring the new kinds of designs and visual experiences technologies like Media Queries and WebGL make possible, just like it took years for the community to find best practices around things like AJAX.

And yet new amazing things keep pouring in. My personal favourite recently has been Web Components which gives a standard way to provide reusable widgets on the web, and to do things like data binding and templating. This alone will make a lot of the popular frameworks and libraries obsolete.

Just watch this video and see how much easier web development is becoming:

The current work on standardizing Web Payments together with more grassroots efforts like Bitcoin promise to add better ways to do business on the web. This should remove the last big advantage of native applications in that they’re easier (but very expensive) to monetize via app stores and in-app payments.

Linked Data on the web and new features like Yandex Islands make it easier to connect web applications and data on the web together. Tools like my Create.js make the web easier to edit, and Web Intents promise even closer integration between web apps.

Each of these will make the web richer and better. Each of them will allow new startups to be built, and new meaningful connections to happen over the internet, many of these using mobile devices.

It is an exciting time to be a web developer. 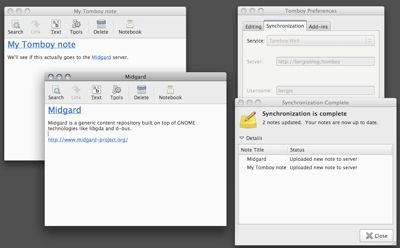 31 May 2009. 1 minute read.
Some very interesting developments in desktop wiki land: Tomboy, the popular note-taking application for GNOME and OS X now supports web synchronization. The developers of Tomboy have launched Snowy, a web service that allows you to synchronize and access your notes online. As the API is documented, I decided to add support for it in Midgard too. This way the... 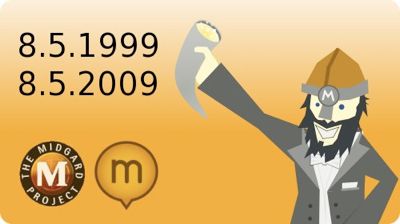 07 May 2009. 2 minute read.
Ten years is a long time. Exactly ten years ago we were sitting in a cramped office room in Espoo with Jukka Zitting, frantically trying to put a release together. We had been building a web platform for our living history group, and it had become useful for others too. We both were Linux users, and back then the concept...