This February I wrote how search engines play an important role in emergence of Semantic Web, and now it is becoming a reality:

Google introduced a feature called Rich Snippets which provides users with a convenient summary of a search result at a glance. They have been experimenting with microformats and RDFa, and are officially introducing the feature and allowing more sites to participate. While the Google announcement makes it clear that this technology is being phased in over time making no guarantee that your site's RDFa or microformats will be parsed, Google has given us a glimpse of the future of indexing.

While I haven't seen any enhanced results yet in my searches, Search Engine Land had a screenshot of reviews being shown with a restaurant:

So far Google is using only review and person data, but they're also advising how to mark up company and product information. Yahoo! has been using microformats for a while now, too.

Once these "Rich Snippets" get rolled out a bit further the fact that Midgard-powered sites have been carrying microformatted content since 2005 will become a big advantage. With the Interactive Knowledge project we will start looking more seriously at RDFa too. 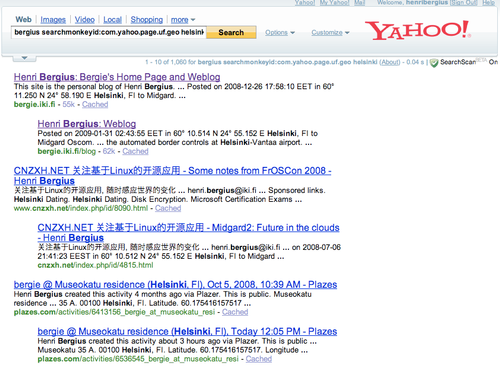 Search engines have an important role in Semantic Web

17 February 2009. 1 minute read.
Thanks to the IKS project, I've spent some thought lately in how to make something practical from the concept of Semantic Web. As always, the big issue is getting the semantic information out there. In a strongly typed CMS like Midgard, many semantics can be gathered from content structure directly, but to really get there we need users to add...

Midgard will have integrated search

11 January 2005. 1 minute read.
Today we secured funding from two clients for developing an integrated search engine into the Midgard CMS. The project will be undertaken by Torben Nehmer and will also improve Midgard's metadata capabilities.