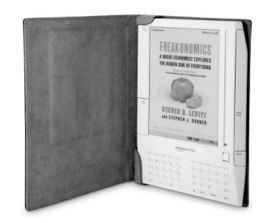 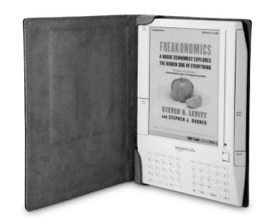 Amazon’s e-book reader Kindle was launched today, and it looks quite interesting:

While the device is ugly it seems usable enough. Now the question remains whether the device will be feasible for use outside the US, as Amazon’s Whispernet system is apparently tied to Sprint, a local operator there.

When I moved away from the Five Corners apartment I decided to de-clutter to support a more working nomadistic lifestyle. I digitized all my music so I was able to get rid of the CDs and gave my old furniture away and replaced it with rented ones.

But books are still an analog product. As no good e-book reader has emerged I’ve been stuck with a collection of big and heavy books that I have to move around. Only when I’ve run out of shelf space I’ve been reluctantly forced to give away or sell them. If the Kindle approach works, it could help me get rid of the dead tree editions and paper magazine subscriptions. But time will tell.

Of course, Kindle is not the only device in the market. My Nokia N800 tablet with FBReader could do much of the same stuff, but the screen isn’t as nicely readable and the book and magazine collection supplied by Amazon just isn’t available.

Updated 2007-11-20: Dive into Mark has very good points about the problems with Kindle’s proprietary approach to e-books.

08 January 2009. 3 minute read.
As it was for the Zend folks, 2008 was quite a busy year also in the Midgard-land. I think the last time there was so much activity and energy in the project must've been sometime in the early days. Here are some highlights from it: Midgard 2: finally a reality The big news of 2008 was that Midgard 2, the...